MUNICH, GERMANY, January 2015 – QLIPP™, the Ultimate Tennis Performance Sensor, makes its debut at ISPO BRANDNEW 2015 as a Digital Finalist. Weighing in at 8g and measuring only 30mm x 20mm, QLIPP™ is one of the most portable, lightest and smallest 3D motion tennis sensors in the market.

The sensor clips onto any tennis racket easily, and once mounted, a user just has to launch the QLIPP™ app (which will be available for both iOS and Android smartphones) to record video playback and track stats. It reports ball speed, sweet spot accuracy, and backhand, slice, and even overhand efforts. Players have the option to allow QLIPP™ to call out stats during a session with its voice feedback controls, or even take slow-motion video playback of every serve and stroke.

“We want to help tennis players up their game one stroke at a time with a performance sensor that truly gets the job done,” said Mr Cen Lee, co-founder of QLIPP™. Dr Donny Soh (PhD Data Mining, Imperial College, United Kingdom), co-founder of QLIPP™ also commented, “Our goal is to produce a tennis performance sensor with the best accuracy possible helping both players and coaches improve faster.”

Part of QLIPP™ technology was licensed from A*STAR, the largest governmental research agency in Singapore. QLIPP™ is supported by the Media Development Authority (MDA) Singapore.

QLIPP™ will be available in the third quarter of 2015 and will retail at US$129 (suggested retail price). Currently, QLIPP™ is available for pre-order (US$99 early bird price) at www.qlipp.com

9 Degrees Freedom was founded in February 2012 by a pair of Singaporean researchers with a passion for innovative lifestyle sports technologies. Their first product, QLIPP™, has been presented at various international conferences, including DEMO Asia (Singapore) and DEMO Fall (Santa Clara). The company won a Bronze Award in Emerging Technologies from the Singapore Infocomm Technology Federation (SiTF) Awards 2012 and a is a Digital Finalist at ISPO BRANDNEW 2015 for its work on QLIPP. 9 Degrees Freedom was incubated by Nanyang Technological University (Singapore), the 6th best Engineering and Technology University in Asia and 29th in the world. For more information, visit www.degrees9.com

Since its first edition in the year 2000, ISPO BRANDNEW has established itself as the most important platform for start-ups in the sport industry. Every year an independent jury, largely consisting of former winners, name the Top 50 Newcomers, all of which are younger than four years. The winners then have the possibility to showcase themselves to the whole of the sport industry in the ISPO BRANDNEW Village in Hall A1 at ISPO MUNICH. This opportunity and numerous other forms of support are provided by ISPO to enable these Companies to get off to a successful start, past winners include GoPro, Maloja, On Running, Naish Sails und Nixon and many more. For more information, please go to: http://brandnew.ispo.com/en/

Singapore-based QLIPP™ has developed a performance based tracking device for tennis players keen to ace the game. The tiny 3 x 2 cm tracker mounts onto any racquet within seconds, and reports ball speed, sweet spot, backhand, slice, and even over hand efforts. Purely wireless, QLIPP™ does not require any configuration except user registration so that a performance profile can be generated.

Players have the option to let QLIPP™ aurally read stats after every stroke while engaged in a match. (imagine doing that with a Bluetooth earpiece). QLIPP™ expects this to be a boon to trainers managing teams for competitive matches as big data meets the Internet of Things (IoT).

Serious aficionados seeking superior game play will appreciate the ease of switching racquets, so they can react to the competition swiftly. QLIPP™ recently closed a six figure seed round, including an investment from Media Development Authority of Singapore (MDA), even as product development pushed past the Minimum Viable Product (MVP) phase.

QLIPP™ will be participating in the ISPO taking place in Munich in February 2015. Pre-orders are available at www.qlipp.com.

QLIPP has emerged as a finalist in the ISPO BRANDNEW 2015 competition, which is also the world’s largest start-up platform in the sporting goods industry. Being shortlisted as one of the finalists in the Digital category out of a total of 431 brands that have participated in the competition this year, we are extremely delighted to receive this form of recognition from the jury. 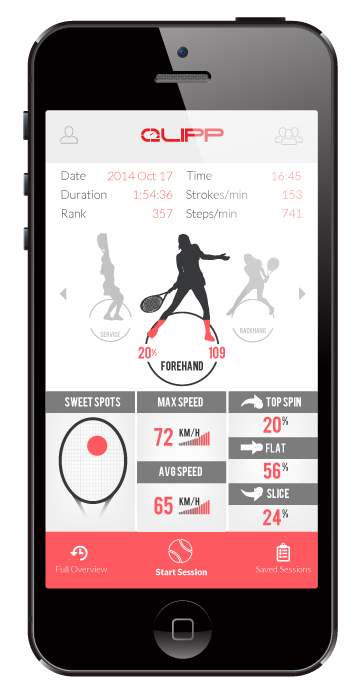 The idea behind QLIPP is to design a sensor to monitor and track the performance during a tennis match – down to each stroke and speed of the ball, at the same time providing minimal distraction to the game.

As such, we are also proud to announce that we are heading to Munich next month for the ISPO Munich Trade Show from 5th – 8th February, where we will present QLIPP to the public at the ISPO BRANDNEW Village. If you are going to be there, do remember to drop by our booth to have a try at our product before its official launch.